12 of Madrid’s Most Beautiful Parks & Gardens

Despite being a big city, Madrid is home to many beautiful parks and open green spaces. Parks are great for enjoying the beautiful weather, good company, or to get workout in and a visit to one of the many parks in Madrid is the perfect idea. Best of all, they cost you nothing! In this article we will outline the best parks in Madrid, but don’t forget about the Madrid amusement parks either!

Take a stroll through El Buen Retiro, or Retiro Park for short. This is one of the best parks in Madrid and also the most well-known. It is located right in the center of the city – along the borders of Barrío Salamanca. Retiro park also doubles as a cultural and leisure spots for the public – with fruit and vegetable gardens, galleries and sporting areas for small groups. You’ll see locals and visitors alike renting a rowboat on the lake, walking through the luscious gardens, or laying down in the grass with a good book.

Admire the panoramic views of El Cerro del Tío Pío, also known as el Parque de las 7 Tetas. This park is situated in Puente de Vallecas. It is one of the best places in the city to enjoy the sunset for a great panoramic photo-op! From the hills, you will be able to see Plaza Mayor, the domes of the Basilica of San Francisco el Grande, Almudena Cathedral, the Telefónica building and more recognizable sights.

La Quinta de Molinos used to be a private estate, but is now one of Madrid’s most peaceful parks. It is the perfect place to de-stress and unwind – especially in early spring when the almond trees blossom. The park is located in the east of Madrid, near the new Atletíco stadium. The community recently built a cultural center as well. Don’t miss it!

The Jardínes de Sabatini are one of two green areas that surround Madrid’s Royal Palace. These gardens were built in the same Austrian style as the palace – to represent the Hapsburg family that married into the Spanish royalty. It’s a small piece of tranquility located right off of Madrid’s busiest downtown area. With a small garden pool, beautiful fountains carved hedges and a up close view of the beautiful Royal Palace.

The Campo de Moro Park is the second open space that surrounds the Royal Palace. This park is known as “The Moorish Camp” after the Moorish army that camped there during their attempt to retake Madrid in 1109. Then it was just a field, but today it is a beautiful and grand park filled with fountains, gardens and tall trees that block out any sounds of the city nearby.

Literally meaning, “Country House” this park was once the home of Felipe II. Now Casa de Campo is one of the biggest parks in Madrid! In fact, a day at Casa de Campo can feel more like a day hiking in the outskirts of the city. The park includes a lake where you can rent paddle boats and many trails to take a run or go for a bike ride through. There are also attractions inside the park, which include an amusement park, the Zoo-Aquarium of Madrid, and fairgrounds.

Fuente del Berro Park is another inner city park that can be found in the neighbourhood of Salamanca. It’s a large piece of land that hosts lots of grassy spaces, beautiful fountains and gardens. What’s charming about this park is that scattered throughout you’ll find remnants of the old structures that once stood on the land. From old winding pathways, rustic stairs and man made waterfalls.

The Parque Oeste is another one of Madrid’s largest parks – spanning nearly 100 hectares. The park is located in the Moncloa area and it is the home of many of Madrid’s famous monuments – like the Egyptian Templo de Debod, the grounds for the International Rose Competition and the Teleferico cable car. The park is filled with beautiful hiking and biking trails and many amazing viewpoints.

One of the most beautiful, but least known parks in Madrid is el Capricho park. The Duke and Duchess of Osuna were patrons of the arts, which is why this park seems so enchanting and filled with wonder. At Capricho park you’ll find many botanical and artistic treasures, like shrines, fountains, and plazas all designed in a beautiful baroque style. Make sure to check out the labyrinth, but don’t get lost! For those history buffs, you can find the Bunker of the Jaca Position, the only example of this type of structures from the Spanish Civil War that you can find in Europe.

The Royal Botanical Garden of Madrid is located between the Prado museum and Retiro park. it was built beside the Prado because it is considered an extension of the museum and takes visitors on a historical and informative tour. The garden is open nearly all year round, hosting special seasonal events evening throughout the winter months. it is considered to be somewhat of a living library – with over 5,000 species growing inside. Entry to the garden costs only 4€ and it’s well worth it!

The Madrid Rio was a massive project that was launched back in 2008. The idea was to turn this industrial area into a charming, thriving sports and leisure area for the locals to enjoy. Today that dream has come to life and the Madrid Rio is now one of the most popular locations for Madrid locals to spend their time. Along the Manzanares River you’ll find tons of play areas for children, biking and walking pathways, grassy areas, cafes and even urban pools to keep cool in the summer.

Much like the other larger parks on this list, the Dehesa de la villa Park is a vast plot of heavily forested land. This park is less curated and maintained as some of the other inner city parks, which allows visitors to feel like they’re taking a break from the city and exploring the wonders of the great outdoors. 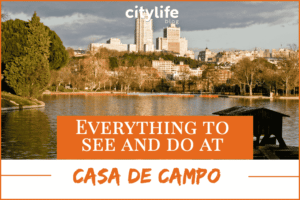 Casa de Campo Madrid: What to see and do 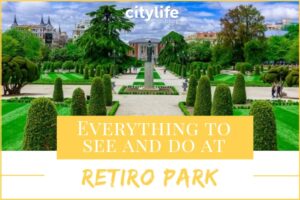 Retiro Park in Madrid – What to see and do 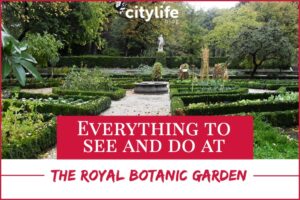 Royal Botanic Garden of Madrid – What to see and do