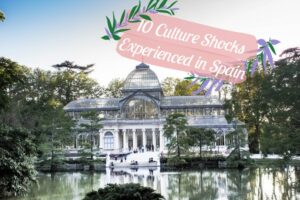 Whether you’re from Europe, North America, Asia or anywhere in between, coming to Spain can be a bit of a culture shock for you! Each country has it’s own traditions and opinions, and Spain is no different. Before arriving in Spain, you can make your transition to a new culture a little easier by reading about the differences between your country and Spain. Here are ten of the things that international students find the most shocking about Spain. Its important to remember, that just because the items on the following list may be different than what is acceptable in your country, they are not “wrong.” Neither country is right or wrong in what they deem to be acceptable or the way to do things, rather they’re simply different! If you come to Spain with an open mind then you’ll have no problem transitioning into a new culture, that you’ll find may be more similar to your own culture than you expected!

The Meal Times Are Different 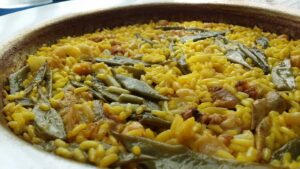 In Spain, you’ll find that the locals eat meals at times you’re not accustomed to. Breakfast is very small (or non-existent) and is enjoyed between 8 am -11:30 pm. Lunch is a HUGE meal, eaten later in the day, between 2 pm to 4 pm. Often, lunch will consist of several courses and a dessert. The Spanish also enjoy a mid-day snack (around the time you might be used to eating dinner) anywhere between 5 pm to 6:30 called merienda. This snack is usually enjoyed with a coffee. Finally, the Spanish eat dinner anytime between 8:30 pm to 10:30 pm. Dinner can also last for awhile. In Spain, meal times are not about simply eating your food and moving on. Rather, its about hanging out with friends and family, talking about your day, and enjoying each other’s company. You’ll find that the Spanish are extremely family oriented. 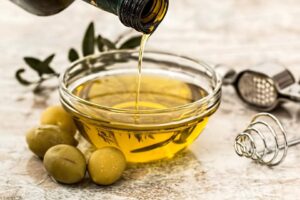 While we’re on the topic of food, it’s important to mention how much the Spanish value their olive oil, or aceite. After living in a homestay for about three months, I’ve found that olive oil will come in most meals. Whether its soups, avocados and tomatoes, chicken, rice, or salads, everything will be doused in a healthy amount of olive oil. Personally, I’ve come to love it! The olive oil adds such a flavor to everything you eat. Aceite is one of the main exports here in Spain. After many years of producing and exporting this product, the Spanish certainly have perfected it. Olive oil is also one of the healthier oils to cook with. 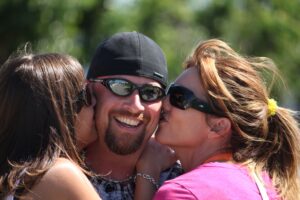 When you see a friend or even meet someone for the first time, rather than shaking their hand, it is proper to give a quick kiss on either cheek. This goes for any situation, whether you’re meeting a friend of a friend, in the workplace, or ran into a friend you know on the metro! This can also apply when you’re saying goodbye to someone. For some, this can be confusing, as it seems too personal, too fast. However, to the Spanish its perfectly normal! Keep in mind, the way they’re do things in Spain isn’t “wrong,” its just different than your home country. Embrace the Spanish culture and the Spaniards that you interact with will respect that you might have tried out their traditions. 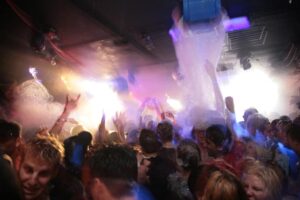 If you’re from most places in the world, your clubs and bars probably close around 2 am. In some places, they might close at midnight. That’s not how its done here in Spain! Party goers don’t head to the club until after midnight. If you’re at a club before then, even on Friday or Saturday, it’ll likely be completely empty (unless some special or event is going on). Clubs are open until the early hours of the morning, or as long as the party goes for. It isn’t unusual for a nightclub to be open until 6 am in the morning. Bars are typically open until 4 am. Getting adjusted to this might take a bit of getting used to, but don’t forget, you’ll be eating your meals much later than you’re used to, so starting your nights out this late won’t feel out of place!

Be Careful of Pick-pocketing 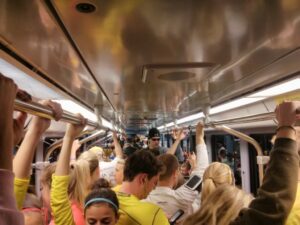 In Spain, in the larger cities especially, the rates of violent crimes are relatively low. If you and group of friends head home from the bar late at night, being mugged isn’t as much of a worry as it might be in New York City or another large city. However, Spain experiences a high prevalence of pick-pocketing. This usually comes in the form of losing your phone at the club or having something stolen out of your back pocket on the metro. If you’re careful and protective of your belongings, then there’s absolutely nothing to worry about. Some hints: keep your bag/belongings in front of you on the metro and bus, handle your belongings carefully if you plan on getting drunk at the club, and leave things you don’t absolutely need at home (ex- there’s no need to bring your passport if you’re going out for the night). As long as your careful, there’s nothing to worry about as far as pick-pocketing is concerned! See this article for our recommendations to avoid being pick-pocketed.

There Aren’t Many Department Stores 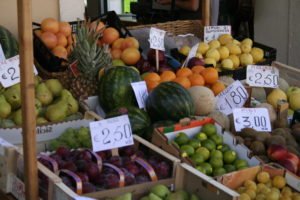 If you’re someone coming from a mid-sized to small city, then you probably have plenty of department stores near you. Walmart, Target, endless shopping malls, and huge clothing stores are the norm. This isn’t as much the norm here in Spain. Rather, smaller boutiques or specialized stores are much more common. Within the city of Madrid, you won’t find a department store where you can buy clothes, cleaning supplies, electronics, and groceries all at once. Outside the main cities of Spain, there tend to be department stores, however, it still may not be exactly what you’re used to. The great news: this gives you the amazing chance to embrace locally owned stores and markets. Head to your closest fruteria to get fruits and vegetables that have been recently picked. Instead of going to a liquor store with a thousand products, head to a specialized wine store and try one of their recommended self-made wines. Take a trip to a panderia to get pastries and breads that were made that morning! No need to buy a loaf of bread off the shelf at Walmart, instead, here you’ll be able to enjoy nothing but the freshest and, not to mention, healthiest products. 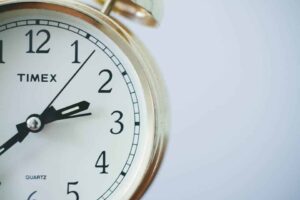 Where I’m from (east coast United States), if you don’t arrive somewhere ten minutes early, you’re considered late. Things must start promptly when they are scheduled, not a minute later. In Spain, they couldn’t have a different mentality when it comes to time. If you arrive somewhere ten minutes early in Spain, let’s say, a hair appointment, your hairdresser will be extremely confused as to why you’re there so early. In the workplace, things are also much more relaxed, and an emphasis is put on getting the job done well, rather than quickly. People may walk slower and take their time at stores or markets. Additionally (this one was really different for me), people are encouraged to take as long as they want at a restaurant. Your waiter isn’t going to bring the bill over to you, subtly hinting that its time for you to get out of the restaurant and free up your table for the next customer. Rather, its typical for them to wait until you ask for the bill, giving you ample time to enjoy your company and simply hang out. Now, I’m not saying to go classes late and expect your professor to be okay with it! But, as you go about your days in Spain, keep in mind that “Spanish time” functions on an entirely different clock than the one you might be used to. 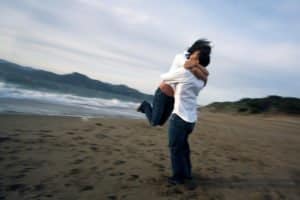 Public displays of affection in Spain are completely normal. Its not unusual to be taking the metro home from work and to see a couple making-out next to you on the train. Most Spaniards believe that PDA is a beautiful way for those who are in love to show that to the rest of the world. On the train, at the park, walking in the streets, you’ll probably see PDA everywhere you go! 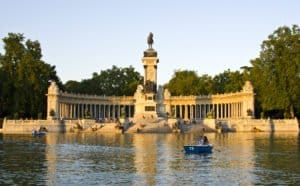 Now, this may come as a pleasant culture shock to many internationals! In Spain, the weather is beautiful. Madrid is the second sunniest capital city in the entire world! From November to March, what is typically considered the coldest time period in many countries, the average temperature doesn’t go below 58°F (14°C). It’s rainiest month (October) has, on average, 1.9 inches of rainfall. Its rare for it to snow in Madrid. In the summer, the weather is definitely considered hot, with July (the hottest month) coming in with an average high of 92°F (33°C). However, there are plenty of different outdoor city pools to escape the heat. In addition, by fast train, Madrid is only 2 hours from the beach in Valencia! All in all, that’s pretty good! If you’re from a country with colder weather, then you’re in for a great shock when it comes to Spanish weather. 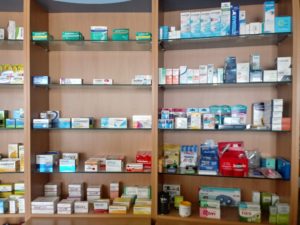 In Spain, a typical pharmacy might not be what you’re used to. If, to you, a pharmacy is a place to buy medicine, but also food, snacks, greeting cards, shampoo, make-up, or house supplies, then you’re in for another culture shock when you arrive in Spain. Here, a pharmacy is only a place to buy medicine, with little other products sold. At a pharmacy, you’ll bring your prescription to the counter and receive your medicine from the pharmacist, and that’s it! If you want of the products you usually find at pharmacies back home, then I suggest heading to a grocery store, for example, CarreFour, one of Madrid’s more popular chain grocery stores. In addition, it’s important to keep in mind that your prescriptions from home may not be valid in Spain. Its possible that the medicine you take at home is illegal to prescribe in Spain. That being said, remember to bring all the medication you will need for the entire duration of your trip to Spain. No need to risk not being able to purchase it when you get here! 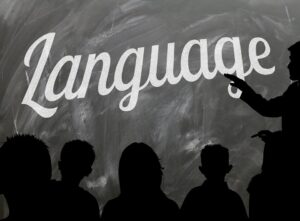 Of course, if you don’t speak Spanish, then the language may come as a culture shock to you. In many European countries, most of the citizens speak both their home language and English, however, this is not the case in Spain (although the Spanish education is changing this for the younger generations). In Spain, if speaking with members of the middle-aged or elderly population, its unlikely that they speak English (or whatever language they speak in your home country). This gives you the opportunity to learn Spanish. You won’t be able to lean on your own language, or English, as a crutch, because no one else will know it. If you come to Spain then you’ll have to dive right into speaking Spanish! Don’t be scared, this is the best way to learn a new language. While you’re at it, check out our article regarding books to read while learning Spanish to make this transition even easier! Check out our other opportunities to learn Spanish through private tutoring, group classes, and other means, here.

If you’re reading this article, then you’re already preparing yourself for the culture shocks you might experience! Good for you for learning the culture of your new country before you even arrive here. We hope that this article has been informative in all of the new things you may experience when you arrive here. Remember, if you have an questions or problems, feel free to contact us at Citylife Madrid.