A Weekend Trip to Barcelona: What to See and Do!

Getting to Barcelona from Madrid is quite an easy feat for even an inexperienced traveler! Any method of travel is open to you, as you can take the fast train, the long distance bus, or an airplane straight to Barcelona. All of the methods of travel are relatively cheap to get to and from Barcelona. The culture, architect, and even language in Barcelona is very different from that of Madrid. Currently (Spring 2019), we are in the midst of a political battle between Spain and region around Barcelona (Catalonia). Many people of Catalonia believe that their culture is so different from the rest of Spain, that they should be their own autonomous country. Even though, currently, they are not their own country, traveling to Barcelona can certainly feel a lot like traveling to a different country than Spain altogether. I recommend seeing Barcelona and experiencing this awesome city for yourself! Here’s our list of things you must see while you’re in Barcelona!

Without a doubt, the Sagrada Familia (a temple designed by Antoni Gaudi) is one of the most popular and magnificent sites to see in Barcelona. The inside of the Sagrada Familia is pictured above, with the sunlight streaming in through the stained glass windows. The outside of the Sagrada is pictured in the cover photo for this blog. You’ll find the Sagrada to be packed with people from near and far coming to see the work of Gaudi. “Who is Gaudi?” you might ask. Gaudi is one of the most famous architects in the entire world and spent most of his life designing buildings in and around Barcelona. The mark that Gaudi left on Barcelona is unparalleled and impressive. Out of all his designs, The Sagrada Familia was the work of his lifetime. Gaudi worked on this church until his untimely death (he was hit by a tram car while crossing the street). “Sagrada Familia” means “Holy Family” and in that spirit, the entire building is dedicated to the family of Jesus Christ. The front of the building is a facade of statues representing his birth, whereas the back shows his crucifixion. Walking inside of the Sagrada Familia, you’ll find it’s not your typical church. The pillars are designed to look like trees, with their tops branching out at the top, giving one walking through the church an impression of walking through a forest. The skylights at the top of the building are meant to give the feel of sunlight passing through tree leaves. Head to the Sagrada Familia to check it out for yourself!

Park Güell and the Gaudi House Museum go hand in hand. Park Güell was designed by Gaudi himself and the work of the architect can be felt throughout the park. As well as having neat architecture, there are several different places in the park that are great for a photo shoot with you and your friends, like the lookout in the picture to the right! Entrance to the main park is free, but if you want to get an up close look at the designs of Gaudi, then its a quick 4.50€ for entrance to a second area of the park. There are several street musicians throughout the park as well. After checking out Park Güell, head to the Gaudi House, also located inside the park. The Gaudi House is where Gaudi lived for a good portion of his life. The house is beautifully designed and kept in pristine condition. Entrance to the Gaudi House is also 4.50€.

Head to the Beach

No matter what season, head to the beach in Barcelona and check out the beautiful Mediterranean Sea. The palm trees stand by the beach year-round, and are a sight to behold. Relax on the sand and watch the waves roll in. If you’re lucky enough to be visiting during the summer, then head to one of the more popular beaches and go for a swim. There’s several different beaches that tourists frequent, including, the most famous, Barceloneta Beach. During the summer, the weather in Barcelona is amazing, perfect for a day spent relaxing by the beach, surrounded by palm trees.

The Gothic Quarter of Barcelona is one of the most beautiful sectors of this city. The streets are narrow and designed in a medieval manner. You’ll find many different bars to frequent in this section, high-end restaurants (including the oldest restaurant in the city- Can Culleretes), and various street vendors. There are palm trees everywhere, as is typical of Barcelona. This neighborhood has been around in Barcelona for over 200 years, making it an area full of history. The above plaza, or Plaça Reial, houses the first work that Gaudi every completed, one of the street lamps in this square. Everyone has to start somewhere! 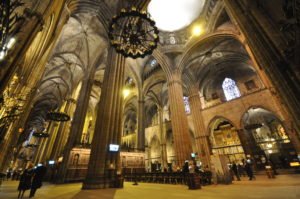 Constructed between the 13th to 15th century, this cathedral is another amazing work of architecture to see in Barcelona. Located in the Gothic Quarter, you’ll find the beauty of this work rivals that of The Sagrada Familia. Over 3 million people visit this cathedral every year. Both Gothic and Baroque art influences are clearly displayed in the artwork of this cathedral, as was usual of the times. Several different times per week, this church offers a mass. Check out the website of the Catedral de Barcelona for more information.

The Picasso Museum is located inside the Gothic Quarter. After checking out the restaurants and architecture of the Gothic Quarter, head over to the Picasso Museum to enjoy some of Picasso’s finest works of art. The Spanish artist, Picasso, spent his teenage years and early professional years growing up in Barcelona. Many of his most famous works of art are in The Picasso Museum (however, be aware that “Guernica,” arguably his most famous work of art, is not on display in the Picasso Museum, rather in is in Reina Sophia right here in Madrid!). The museum is designed so that your journey through the museum follows the timeline of Picasso’s art. You can watch the progression of his art, as well as the many phases of art that Picasso went through, change right before your very eyes. This museum is also very affordable, with student tickets at only 7€.

Museum of the History of Barcelona

You’ll find this museum to be different from your typical Spanish museum. At the Museum of the History of Barcelona, the Roman roots of this city are on display. There are thousands of different artifacts left behind from the Romans when they had control over this city in ancient times. Most importantly, this museum researches the history of Barcelona, all the way from ancient times to present days. If you click the previous link, you’ll see that this museum has several different locations throughout the city. Most of these locations are remnants of the ancient Roman city that used to stand there. Each location may have different costs and hours, so be sure to research that. However, the “headquarters” of the museum is located in the Gothic Quarter. In addition to the ancient sites, there are contemporary sites throughout the city relating to the Spanish Civil War and Antoni Gaudi, among others.

Temple of the Sacred Heart of Jesus

If you want to escape out of the main city of Barcelona, then take a half-day trip out to the Temple of the Sacred Heart of Jesus. This church looks more like a castle, and sits in the middle of the mountains outside of Barcelona. For a small fee (3€) you can take the elevator to the top of the towers to see an amazing view of Barcelona from a distance. Getting to the Temple is also an experience in itself; on the way there we took a metro, a cable-car, and a bus! However, the views from the last two were amazing, as we had made it into the mountains.

Out in the mountains, right next to the Temple of the Sacred Heart of Jesus, there is a full blown amusement park! With rides from the Ferris wheel shown above, to a roller coaster, to a carousel, and everything in between, you’ll find numerous rides at this park. After checking out the Temple, head over to the Tibidabo Amusement Park and spend some time on a few rides. The views here are also spectacular. From the top of the Ferris wheel, you can see the entire skyline of Barcelona, Sagrada Familia included! If you don’t want to pay the 20€ for unlimited rides, then you can pay 2€ per ride, which is what my friends and I did.

This bustling market is one of the most famous in Barcelona. Here they have fresh fruit, vegetables, meats, sweets, snacks, and everything in between. While I was there, I got some fresh fruit juice that was delicious. There are hundreds of different vendors inside the market; you’ll certainly find something to your liking. Most things at the market, I found, were super cheap and affordable. 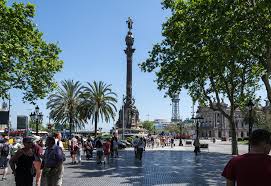 This charming center street in Barcelona is lined with trees on either sides. Endless shops, markets, and street vendors also line the sidewalks. There are so many different things to participate in on La Rambla, that everyone will find something enjoyable. Check out this article, dedicated to finding things to do while taking a stroll down this scenic street. Mercado de La Boqueria is right off La Rambla, so you can hit up both points at one time. 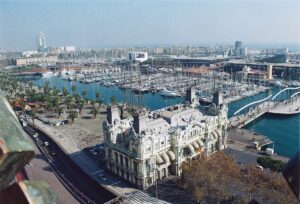 Port Vell is one of the main harbors in Barcelona. Prior to the 1992 Olympics which were held in Barcelona, this port was rather run down and old. However, after renovation, this port area now hosts over 16 million visitors per year. Port Vell is just a short walk from La Rambla, so you’ll certainly be able to see both at once. At Port Vell there are several things you won’t to miss. For starters, be sure to check out the Christopher Columbus statue. This statue is over 197 feet tall, and definitely a sight to see. This statue marks the fact that Columbus reported back to Queen Isabella and King Ferdinand (the royals who funded his trip) in Barcelona. Additionally, in Port Vell, you can check out the huge aquarium, L’Aquarium Barcelona. At this aquarium, they offer a special offer in which you can cage dive with sharks!

I hope this guide to Barcelona has been helpful in your trip planning! Don’t forget to check out our Ultimate Guide to Planning Weekend Trips. Check here to search for cheap flights, hotels and rental cars. If Barcelona doesn’t interest you, then you’re in luck, Citylife goes on many different trips throughout the semester, and there’s something for everyone to enjoy. Remember, if you have any questions, you can always contact us here at Citylife, and we’ll be happy to help.