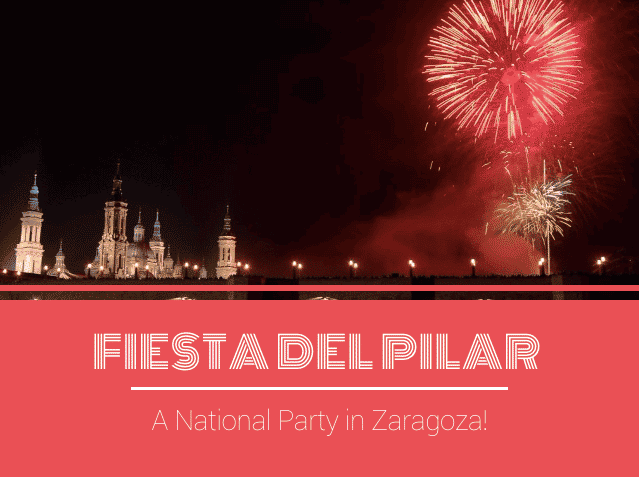 Fiesta del Pilar is on our 12 Must See Festivals in Spain list, and is a very important date on the Spanish calendar! People have been traveling from around Spain and Europe to take part in this religious festival since 40AD, when Zaragoza was only a small city founded by the Romans called CaesarAugusta. And each year beginning of October Citylife Madrid will be traveling there as well! 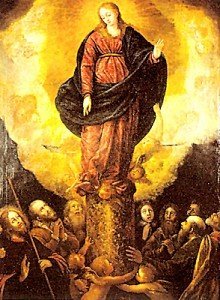 As the story goes, in 40AD Christianity was new to the world and James the Greater was on a mission to convert the people he met on this journey through pagan Spain. This was a difficult task for him and most of his gospels were ignored by the locals he preached to. One day, while James was praying for help on the banks of the Ebro River, he saw a vision of the Virgin Mary standing on top of a pillar. Mary explained to him that he must continue with his mission and soon the people would convert so long as he kept his faith. She also told him that he must build a church for her on the very ground they stood on – which he did. The Church is now a large Bascillica called Basillica of Our Lady of the Pilar (Catedral-Basílica de Nuestra Señora del Pilar), where the pilar and the wooden statue of Mary now sit. 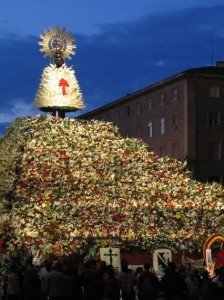 The Offerings – For those who want to experience the religious aspect of the festival you can participate in many offerings throughout the day. The focal point of the fesitval is the offering of the flowers. As a massive parade passes through the city can decorate the shrine to Mary with flowers. By the end of the day the float is covered in these flowers and is actually quite the spectacle

The Parade – Along with the float of the Virgin Mary, there are some items in this parade that are unique to Pilar. These are the Rosary floats. 30 floats made completely of glass we made to represent the elationship between religion and art.

The Exhibition –  A more modern tradition, the exhibition area of the fesitval is a giant open-air market. Where you can find all kinds of thrift items, food and beer!

Bullfighting – As with every traditional Spanish festival, Zaragoza opens its bull-ring to the public. Here they host bullfhights, and many community activities and games.

Food & Drink – Throughout the city you will find massive food and beer stands where you can enjoy the most typical foods from around the country. Golden beer, smoked meats, fried food and baked goods are all you can smell everyhere you go! 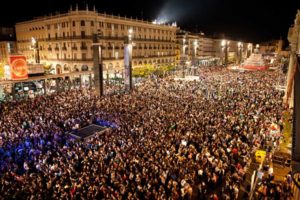 Party – Not only are all of the bars open, but during Pillar you can drink in the streets with your friends! Walk from bar to bar as you dance around and meet people from all over the country!

The Closing Concert – The fesitval comes to an end on the evening of October 12. There is a massive stage in the centre of the main plaza. You will enjoy music of all genres until the final DJ’s go onstage to pplay the best dance music of the year. This is where the party gets serious!

Citylife Madrid will be heading the the fiesta at the beginning of Octobre, if you would like to join, click here for more information. We hope to see you there!